Reflections on a Recent Retreat at Chapin Mill 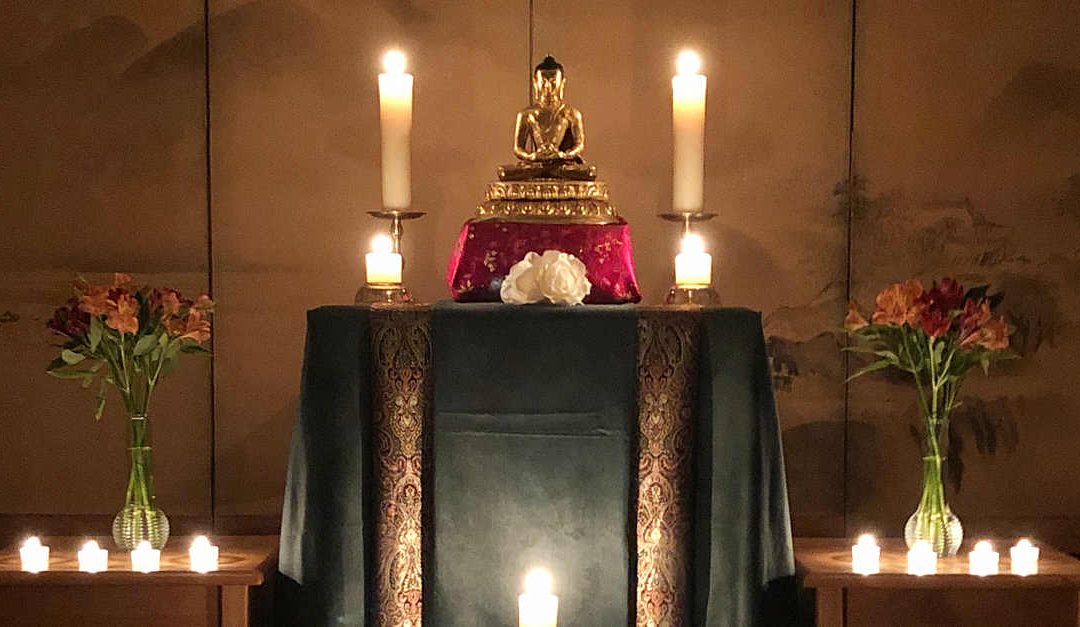 On Friday, Feb 8, 2020 a group of 15 dhamma friends gathered at Chapin Mill Retreat Centre in Batavia, NY for a 2 weeks retreat with our teacher Jim Bedard. Some yogis arrived earlier and helped convert a large ‘Piano Room’ at the Center into meditation space where all group activities (including group sittings and dhamma talks) would be held. The focal point in the room was the altar with the Buddha figure, set up against a background of a wall-sized evocative Japanese painting.

As the group gathered together for dinner prior to the start of the retreat, there was a deep sense of joy at seeing friends again from prior retreats and a genuine delight at meeting new ones. Shortly after dinner we transitioned into Noble Silence, and the retreat opened with Jim’s opening remarks and overview.

This retreat was to be a different one, with the practice structured around the Anapanasati Sutta (Majjhima Nikaya 118), the Buddha’s instructions on developing mindfulness. In his exposition, Jim brought out ‘shades of meaning’ within the sutta, with the objective of providing an entry point for bringing the guidances in this sutta into direct experience by ‘breathing awareness into the body’. To facilitate this, each day would start with a meditation theme that would be aligned with the part of the sutta that was covered. That theme would then be used as a reference point for practice that day and echoed in guidance offered by Jim throughout the day.

Daily schedule was set up to allow lots of flexibility, each practice period included times for group practice and times for individual practice. The formal practice centered on sitting and walking meditation, but the aim was to go beyond that and use all activities, including individual and work tasks, as practice opportunities, thus creating a ‘flow’.

To support our practice, we had regular interviews with our teacher, both in groups as well as individually, supplemented by two group Q & A sessions. Interviews were very helpful in addressing questions specific to individual practice as well as providing the opportunity to hear about and learn from others’ experiences.

As the retreat progressed and thegroup got deeper into Anapanasati Sutta a sense of natural unfolding developed, and the initial more deliberate effort opened into a flowing stream, with a feeling of ‘effortless effort’ both on- and off the cushion (not to say that there were no internal struggles!). This sense of ease became evident in all activities, from guidances, to dhamma talks, and common tasks, creating an environment in which ‘work was being done without any one doing the work.’

The last evening of the retreat was special: the altar was redecorated, and the soft light of many candles illuminated the altar and individual faces as Jim led the chanting. This was followed by reading of the story of the Buddha’s enlightenment experience as told by Ajahn Sucitto in ‘Touching the Earth’ (from the book Parami: Ways To Cross Life’s Floods), a fitting conclusion to a retreat where staying grounded and broadening our practice; observing and learning from all activities (internal and external) were the key themes.

As we emerged from the retreat, we went back into a world that was about to change in ways difficult to imagine only a short time ago. The key themes and teachings of the retreat still resonate deeply as skilful ways of engaging with these changes.

With three bows of deep gratitude to our teacher Jim Bedard for leading the retreat and all participants whose effort, commitment, and contributions created a field of practice that went beyond any individual.